The Concerted Strategies for fighting Female Genital Mutilation (CS-FGM) is a network bringing together Belgians from various sectors affected by FGM, such as: health, lifelong education, childcare, judiciary, assistance for asylum seekers and youth welfare, as well as those affected by FGM, politics… 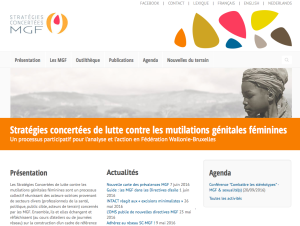 The network was developed in 2008 and was the result of observations made by the principal grassroots associations: there was a need for coordination between those in the field who were leading actions against FGM.  The network’s aim is thus to improve the quality of prevention and support for women affected by the problem. In addition, there should be recognition of the work done within the structures of political and administrative bodies.

Together, the organisations and members of the CS-FGM exchange and reflect upon their ways of preventing FGM. Numerous workshops, methodological and thematic, have been organised since the network began.

They have published several toolkits for professionals, including the FGM Prevention Kit and the Good FGM Practice Handbook. All these toolkits are available on their website.

The Concerted Strategies for fighting Female Genital Mutilation’s website (http://www.strategiesconcertees-mgf.be/en/), available in French, Dutch and English aim at being the reference site for FGM in Belgium.  There you will find information on FGM, a calendar of events organised by the network and its members, book reviews in addition to interviews with those working on FGM. The Concerted Strategies for fighting Female Genital Mutilation (CS-FGM) is coordinated by GAMS Belgium.