The World Health Organisation (WHO) defines female genital mutilation as all interventions leading to a partial or total removal of the external female genitalia or other lesions to the female genital organs practiced for non-medical purposes (WHO, 2008).

Female genital mutilations were classified into four types. This classification was modified in 2007.

In practice, they are frequently distinguished into two main categories: excision and infibulation (the distinction between the two types is not always easy for a clinician not familiar with female genital mutilation) It also happens that the labia minora (small lips) grow together spontaneously without being stitched with thread or with thorns from the Acacia tree.

The most recent estimations (UNICEF 2016) consider that 200 million girls and women underwent one female sexual mutulation and that a further 3 million girls are a risk every year. Half of the population concerned meaning 100 millions are scattered in three countrieses: Egypt, Ethiopia and Indonesia. If the practice is present in at least 28 African countries, and also among certain ethnic groups in Asia (Indonesia, Malaysia,…), in the Arabian Peninsula (Yemen, Oman,…), in the Middle East (Iraq, Iran, …) and Latin America (Colombia, Peru). The prevalence differs greatly by region, including within countries. The group ethnicity and region of origin are the determining factors..

The prevalence study coordinated by GAMS Belgium and backed by SPF Public Health and the Institute for the Equality of women and men (collaborations : ULB, IEWM, SPF Public Health, Doctors of the WorldOpgroeien, Fedasil, CGRA, IWEPS) shows that on December 31st 2020 the estimated number of women and young girls originating from countries that practice female circumcision was 93 685. Amongst these, 23 395 have most probably been circumcised and 12 064 are at risk of being. The Flemish Region (16 089) young girls and women already circumcised or at risk of being and the Brussels-Capital Region (9 784) are the regions the most concerned followed by the Walloon Region (7 989). We have to add to that another 1 428 young girls and women asylum seekers who have not yet been located in the three regions as they are not recorded in the National Register. 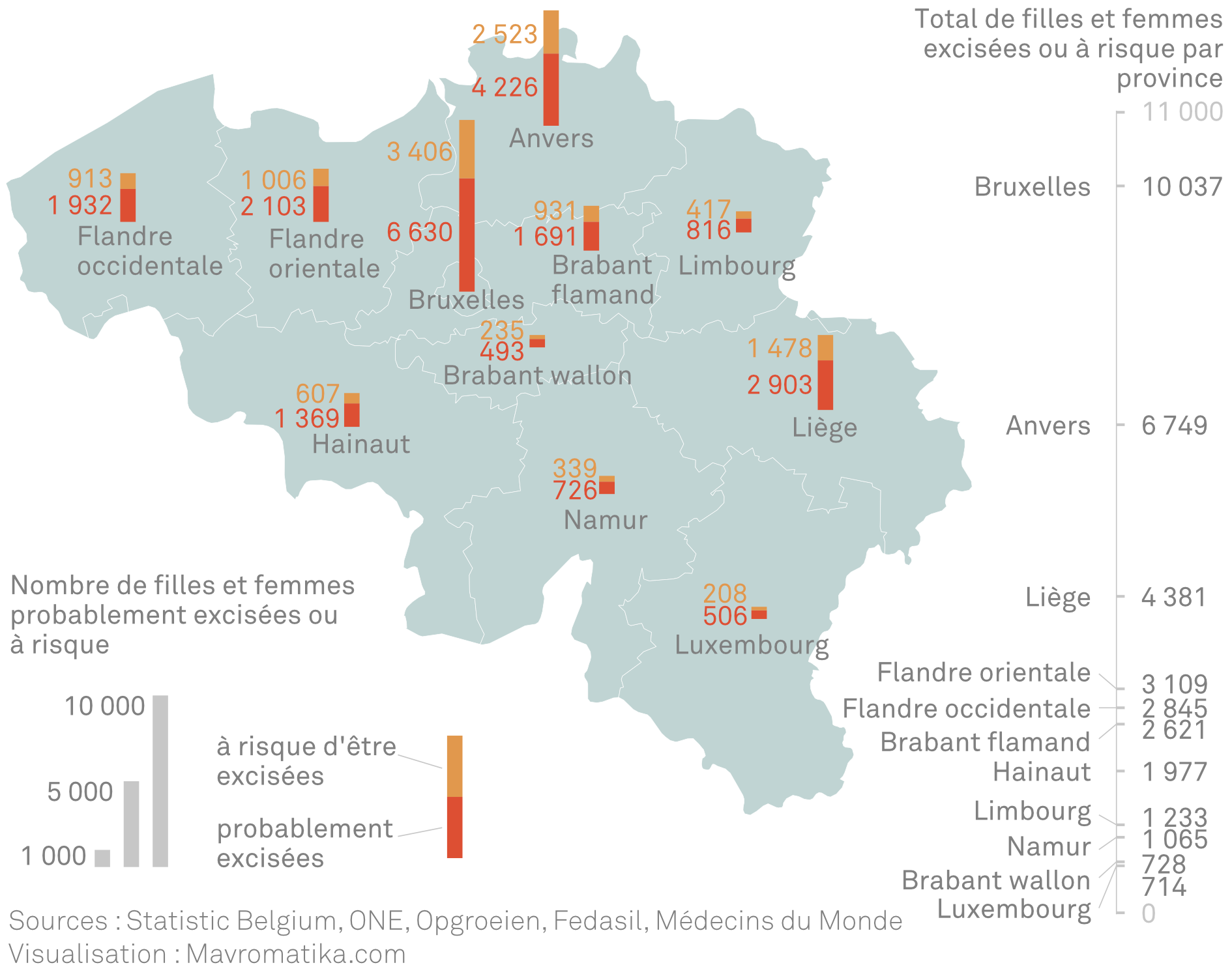 Figure 3. Estimation of the female population very probably circumcised or at risk of being by province at 31st December 2020. (Sources : Statistic Belgium, ONE, Opgroeien, Fedasil, Doctors of the World)

Reasons in support of the practice

Several reasons are invoked by the populations concerned to justify these practices, and many combinations are possible. The reasons habitually cited differ from countries and ethnic groups, but aso within the same ethnic group, according to age or sex (Gillette-Frenoy 1992).

If the status of the circumcisors isn’t part of the justifications invoked by the population, it can however, be considered as an element favouring the continuity of these practices. Indeed, female genital mutilations are a source of income and social recognition for the circumcisors. They have, therefore, no interest in stopping the practice.

Who practices female circumcision and at what age ?

In the countries of origin, the mutilations are practiced by old women, traditional birth attendants or barbers and sometimes by doctors or trained midwives even though this is prohibited by WHO.

In the Western countries that host communities originating from these countries, young girls are still victims. The family call upon an expatriated cutter or send their daughter on holiday to that country so that she can be circumcised.

The mutilations are generally performed between the ages of 4 and 14 years, but can also be done at only a few months old or just before the marriage. Recent years have seen a lowering of the age of female circumcision. One of the reasons is to hide the practice from the authorities as many countries have legistated against this practice. The child being too small to run from the circumcision or to lodge a complaint.

What are the complications

Psychological consequences
The traumatic aspect of the event can be pushed into the child’s subconcious at the time of the mutilation only to reappear years later under different forms.

Since 2001, a specific criminal law provision on FGM was adopted under Belgian law.
Article 409 of the Belgian Penal Code (entered into force on 27th March 2001) provides for a prison sentence of 3 to 5 years for

« all persons participating, facilitating or encouraging all forms of female genital mutilations or any attempt to do so, with or without consent of the person concerned. Any attempt will be punished with a term of imprisonment from eight days to one year (…)». - Art. 409 of Penal Code

Since the month of July 2014, all incentive to practice FGM is equally punished with a term of imprisonment (of 8 days to 1 year). The fact that the victim is a minor constitutes an aggravating circumstance, as well as the importance of the aftereffects, profit, and in a general manner situations of dependency and vulnerability (when the author has authority over the victim, either a parent, doctor…). According to the circumstances the punishment can rise as high as 15 years imprisonment.

Furthermore, any person who has participated in, encouraged or facilitated FGM on a minor, including abroad, can be pursued in Belgium on the condition that the author is on Belgian territory (Principal of extraterritoriality).

In Belgium very few complaints have been filed and no conviction has been pronounced since the provision penal entered into force (15 complaints between 2009 and 2014). Thus, there is no available jurisprudence on this subject.

Various international conventions have been ratified by Belgium and numerous other countries: